... NATHAN OLIVEIRA WOULD HAVE ADMIRED 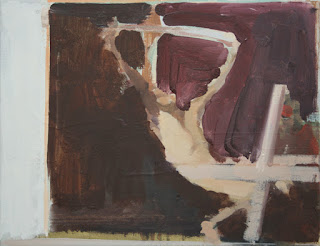 The "Bay Area Figurative Style" goes back to the year 1950 when David Park submitted a heavily brushed painting of a jazz band -- "Rehearsal" -- to a group exhibition at San Francisco's De Young Museum. His representational painting looked so out of place among the field of Abstract Expressionist entries that it was thought to be a joke. It wasn't: it was a serious attempt at something new, a recognizable image painted with a vigor and spontaneity borrowed from abstraction.

At the time, San Francisco was then considered an artistic backwater, at least according to Clyfford Still who taught with Park at the California School of Fine Arts in Oakland. "Here I continue to paint in world of lethargy to art that is worse than outright death," Still wrote melodramatically to his friend Barnett Newman in late 1949. A "my way or the highway" abstractionist, Still couldn't understand that in fact a historic style was about to be born, one that both incorporated abstraction and repudiated it.

Park's fresh approach opened up a vibrant artistic conversation, a dialogue between abstraction and representation, that continues to this day. "Legacy in Continuum: Bay Area Figuration," on view at the Bakersfield Museum of Art from March 22 through May 27th is an exhibition that demonstrates the continuing impact of a very engaging, flexible style.

The show pairs the work of some early Bay Area notables -- Elmer Bischoff, Joan Brown, William "Theophilius" Brown, Richard Diebenkorn, Nathan Oliveira and Paul Wonner -- with a selection of artists who have benefited from their examples. If there is one real lesson that Bay Area Figuration has taught American painters over time, it is that nothing should stop a painter from playing the range between painterly figuration and painterly abstraction.

The term figuration is defined as "of, relating to, or characterized by the naturalistic representation of the external world." Certainly the hybrid style that Park opened up had its roots in naturalism, but several of his friends -- Diebenkorn, Bischoff and William Brown -- bounced back to abstraction at some point in their careers. In "Continuum" many of the current painters play the range, all the way to what Richard Diebenkorn called "the ends of the stick."

The exhibition includes works by William "Theophilus" Brown, who died this past February, and his partner Paul Wonner (1920-2008) that seem to bracket the stylistic range of the show. Wonner is represented by "Nude and Indian Rug," a 1961 oil featuring buttery brushstrokes that evoke the impasto style of David Park's late works. Brown's 2002 acrylic/collage is abstract, but hints at references to the landscape. Unfortunately, Brown's piece was not able to be loaned for the show, although it does appear in the catalog.

Mitchell Johnson, who effortlessly walks the tightrope between representation and abstraction, demonstrates a deft touch and lyric color sense in his Tuscan townscape "Torrenieri." Kim Froshin's "Picnic Window" is a crisp, smart acrylic/and collage that nods to Diebenkorn but also has just a slight infusion of Thiebaud. Dennis Hare's "Still Life" has a craggy impastoed elegance that David Park would have admired.

"Martyrdom," an oil on canvas still life/stele by Eduardo Alvarado, speaks quietly about spiritual and historical references in a tone that Nathan Oliveira would have admired. In fact, Alvarado lives in Spain, but Oliveira was a very important painter for him. With the help of his friends Kim Frohsin and John Goodman, Alvarado was able to visit with Oliveira for 2 hours in 2009, just a year before the revered artist's death. "It was one of the most important moments in my life," Alvarado recalls.

Oliveira, who is represented in the show by a 1961 oil portrait of his mother, was a friend of Polish-born Waldemar Mitrowski whose small canvas "Outdoor" is enigmatic and poetic, and a mentor to John Goodman whose "Figure #29" is sensual and singular

"Legacy in Continuum: Bay Area Figuration" honors and celebrates a way of thinking about painting that continues to touch a new generation of artists, both in the Bay Area proper, and across the Atlantic. It has been more than 60 years since Park brought back the figure, and the style he gave birth to still has legs. 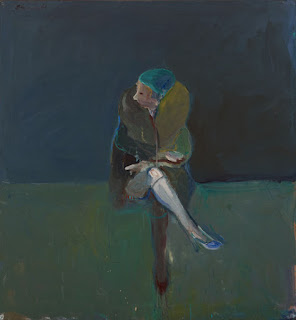 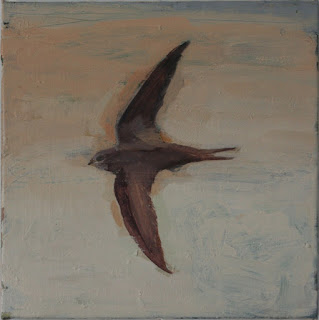 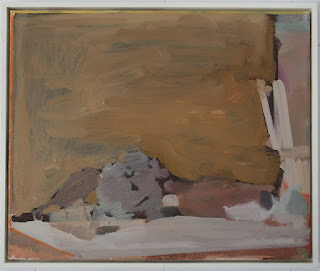 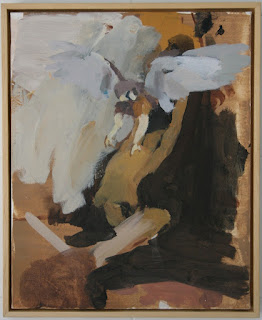 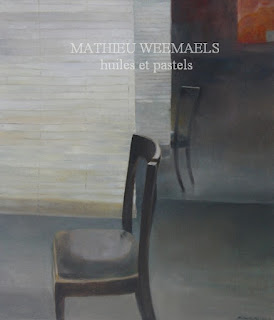 "At first, I used to draw almost exclusively in soft pastels, whose subtle tones, delicacy and luminosity seemed to be perfectly adapted to the intimate world of my pictures. Having learnt to make my own sticks of pastel from pigments, I can get extremely close to the tints and consistencies that suit me best.
There is nothing premeditated about my work. It is the fruit of a daily involvement in painting and drawing. I am in a sense the observer of my own activity and sometimes only understand what I have done much later. Over the years a number of themes have emerged and evolved.
The origins of my first pictures are to be found in the interior world of my studio: simple, everyday objects, some of which just happened to be there, others were brought in on a whim or were the result of discoveries made in the course of the work: candles, jackets hung on a nail, pieces of cloth, tables... Although I have always been drawn to representation, my intention has never been to copy exactly what I see, but rather to make an expressive work, independent of its sources. Fundamentally the real subject of my ‘corners of the studio’ is silence, solitude, and beauty, emanating from the objects, perceptible only when you watch and wait. The cold Belgian light is an important element, bringing with it something mysterious, a kind of nostalgia.
Mirrors occur frequently in my compositions. I have always very much liked to see reality reflected, creating the illusion of another possible world, another reality close at hand. I have gradually developed the idea of using mirrors like windows, or like a picture within a picture, a link with abstraction: a deregulated space in the heart of the demanding environment of figurative painting." 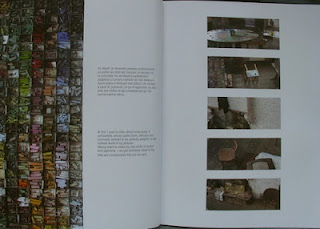 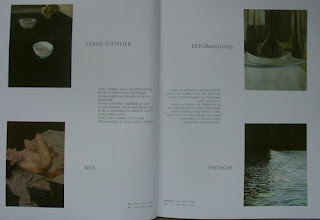 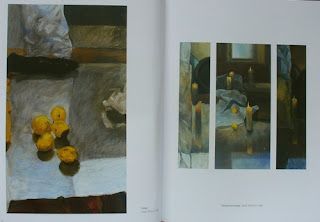 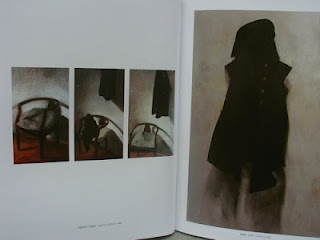 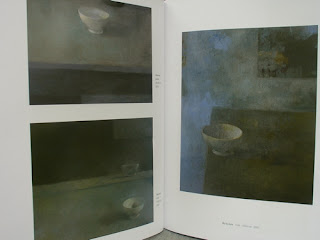 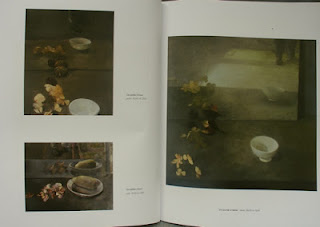 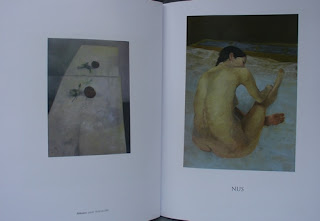 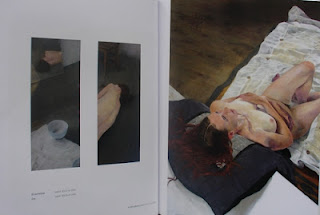 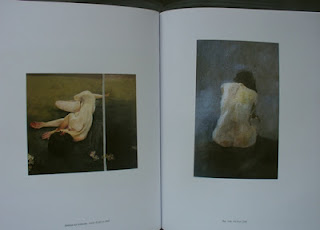 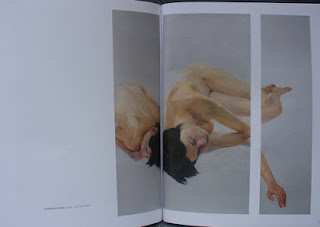 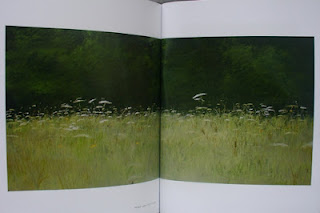 THE MAN IS NOTHING, THE WORK IS EVERYTHING 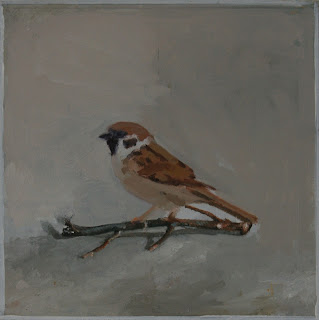