David Lynch about the song:


It's in a pattern of three, three and three.

It's like ... there's ... these are in groups of threes. Like one two three and then there's a break. Four, five, six – a break and then the chorus. It's kinda cold. Cold and warm. Chorus is kinda warm.

A Woodsman Calls
A Woman Cries
I See The Moon

2) A Garden Wall
A Misty Rain
Cold Stars Look Down 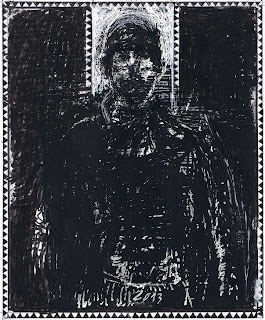 A TRIBUTE TO JASON NOBLE 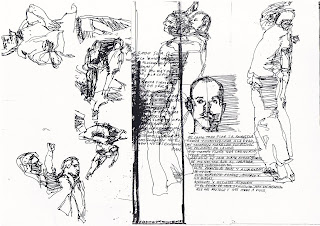 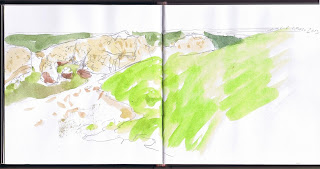 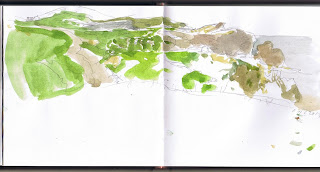 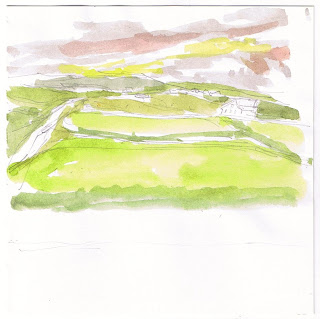 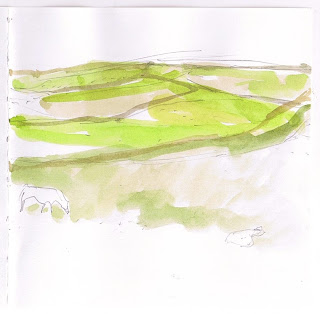 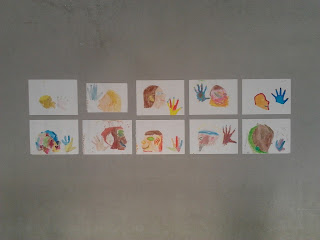 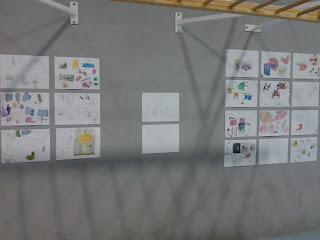 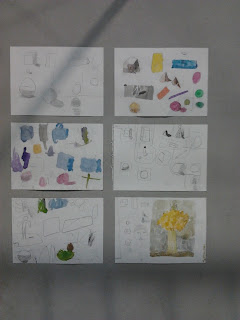 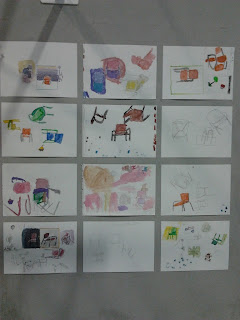 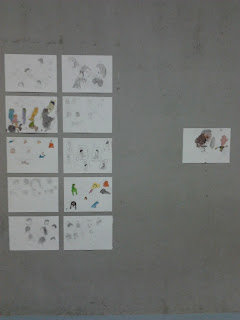 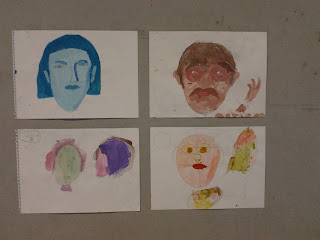 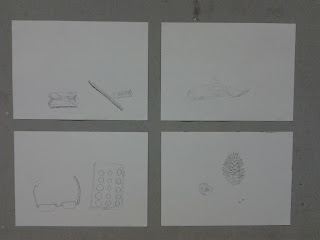 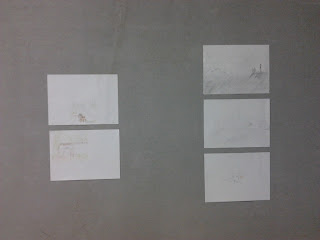 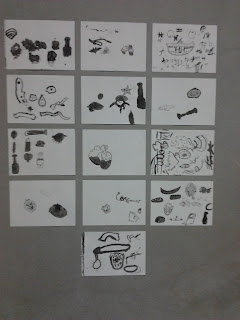 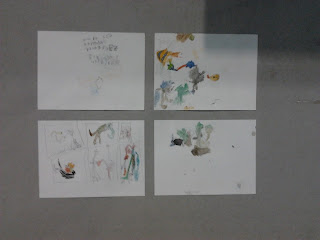 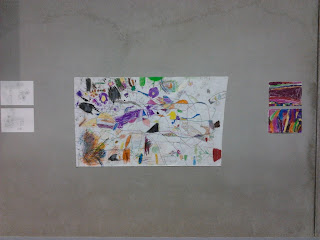 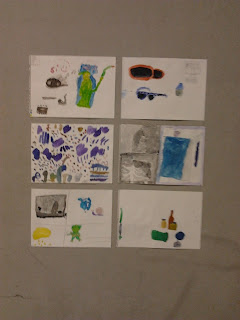 PATRICK HALL: ENERGY IS NOT LINEAR

Based on an interview with Hans Ulrich Obrist

To begin with the beginning. I was wondering how you started to work and how, when the decision for you was made to go into painting, and if there was any sort of trigger for that.

I was in Dublin and I was about 17 or 18, and I saw some paintings and pieces of sculpture which I found, I don't know how I found them, but they were a doorway out of a kind of previous life into a new life. There was a Georges Rouault among others. And at the time I was moving from childhood to adulthood, and this was a doorway to reach a kind of liberation from family life that I had been used to, and all the tensions and darknesses that go with family life. So that was the first light. Also when we were in our teens, we were broke, and we began to sell all sorts of things, property and things in the house and I think there was a need in me to have things around me that I thought were beautiful or had meaning or that I could connect with and sort of earth me. So I decided to become a painter. Certain objects nurture one. When I'm in my studio, it's the one place above all others I'm actually most in touch with the earth and with myself, and at the same time it's freedom, the greatest objective in life.

Objects are very important to a child, because when we're children objects represent reality; in an inner way they become echoes of one's own inner reality. I think that's why I decided to make objects that would make that echo, that would make real life for me, and achieve the heart's dream.

What about the role of religion?

The sense of religion is very strong in me, it's indefinable ambiguities, the timeless infinitude of space. My father's family was Protestant and my mother's family was Catholic so that helped. That also puts me slightly on the edge of society, or maybe I have chosen to be on the edge, but that is one part of my history that removes me from the centre, edges feed me. Gradually as I got older these things became very meaningful for me and have remained very meaningful for me. They were doors to transcendence, to stepping outside of myself, towards otherness. Religion I suppose is a kind of window to the sky. I did an exhibition of paintings of clouds and the cloud represents a kind of unknowing. There's a thing called the cloud of unknowing, so religion is about not knowing. Religion is really a bad word, inaccurate. Otherness matters more than anything.

You've lived through all these different decades, and I was wondering if you have had dialogues with other artists, or is it a more solitary activity?

I have one or two painter friends but in formative terms it's been largely a solitary experience. After leaving London and going to Spain I just went my own way. I'm not a great mixer with painters or other artists in Ireland for that matter. I think isolation is part of the work and is part of my life and I like my isolation. We were talking about Caspar David Friedrich and I like that sense of being on the edge of the ocean, and if painting and art is the ocean I'm on the edge looking out, like those little figures of his, anticipating the journey beyond.

Which museum influenced you most?

What was important in Titian for you?

It was the quietness and in that way I think Velazquez echoed Titian. A painting is really valid for me only insofar as it is silent, and the work comes out of silence and goes into silence. Work speaks to you only for a split second, a microsecond, and then it closes, the curtain comes down again and you don't see it, and you could see it a hundred times but it doesn't say anything; then one day it does because the energies are different, or the time's different. Also, I like the way Titian's painting disintegrates as he aged.

Throughout the 20th century there have been so many dialogues between art and literature and I think right now there is not enough focus on that. I was wondering about your relationship to poetry and literature.

In terms of poetry the poets that would have had a big influence on me were Dante, Paul Celan. There's an Austrian writer called Hermann Broch, and Herman Hesse too, also Thomas Bernhardt. Yes, reading is seminal for me. next to painting, reading is very important, and listening to music.

Broch was an isolated figure in a sort of way. He wrote a great book called The Death of Virgil, about the dialogue of Virgil as he is dying, as he is on the edge of another world, and the dialogue that accompanies that journey over the brink. I think, out of any book I've read, that comes the closest to verbalising that moment, that step where you step over into otherness, which is really what I try to do in my paintings.

So there's obviously an analogy between Broch's book and what happens in your paintings in terms of that threshold?

Marcel Duchamp said that the viewer does 50% of the work, would you agree with that and what is the role of the viewer whom you bring to that threshold?

Energy itself is non-linear; you're going in every direction and more at the same time. Also you're going more inward than outward, and there are no paths, there are no lines, it's a circling in to the heart of things. It's being, just being, outside of space and time.

That's very beautiful. Energy is not linear; it could almost be the title of this conversation...If one looks at your work, it's not a linear evolution of painting.

Well painting is always a surprise, I think, and just as life is a surprise, and we don't know as we take one step after the other what the next step is going to be. So there's an unknowingness, and lines are things that the human mind creates out of knowledge and out of knowing and because reality is unknown and unknowable, it is by definition non-linear.

It's a very good answer to what Gregory Chaitin says about mathematics, the unknowable.

The stone in your work appears almost in an abstract way and then it appears as a sort of skull, a mountain and then it appears as a very gigantic mountain, and it also oscillates really between small and big. There are very gigantic stones, which are burning mountains, and then there are tiny stones. Could you talk about the different scales of stones and also the link to the skulls because there are these mountains of skulls, which are almost post-apocalyptic environments?

Stones, what can I say about stones? Stones are everything. You know the heart is a stone. Stones are clouds come down to earth; we are stones. We live in buildings that are made of stone. Everything is stone. Stone is the fundamental material that the alchemists used in the alchemical process as a metaphor for the human psyche. In a way the life of the psyche is almost like the life of a stone, it changes imperceptibly. Stones get worn by drips of water and the human psyche over the millennia changes by the drip of life. So everything is a stone really. It has an immense energy. They used to say in the time of the Greek civilisation that the gods retreated to the mountains, but I think stones are kind of the abode of the gods in some ways, insofar as deity is incarnated and made human. There's stone at the tomb of Jesus. The stone closes and opens. I can't say anything more about stones. And there are the stars. Stone is alpha and omega.

If you paint a stone or if you paint a cloud – is it the same? The cloud in some kind of way is not permanent, and the stone is maybe not permanent either but it is definitely more of a long duration than a cloud.

What does duration mean? We have this construct of time in which we say the clouds are past and the stones are permanent, and we're permanent, but this is a conceit. The clouds are changing, they don't cease to exist, but they have gone out of sight. Now we've a blue sky, no clouds. That's not true. Just the same as when the sun disappears in the evening it doesn't cease to exist.

Do we have identity when we sleep or do we have identity when we're dead? There are more dead people in the world than living. Where do they go? Very often I notice in the making of a painting when you abandon all hope of making a painting, when you have lost all ambition to be creative; it's in the moment of destruction, or moment of freedom. Death releases us from time and linearity.

After your many travels you found a place in the countryside. Can you tell me a little bit about how your studio works?

The studio has no light except the north light in the roof. The studio is my home in a sort of way because, more than the little house I have, the studio is totally enclosed. It's a kind of tomb; it's a kind of ante-room of death, a place of journey, in which one makes painting a stab at the Faraway, like Gilgamesh, nothing ends there, it's always a beginning.

WHERE THERE IS IMAGINATION THERE IS LOVE 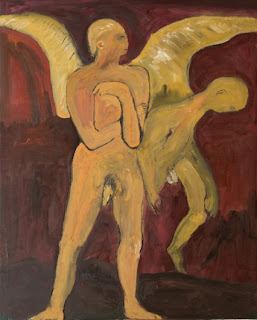