SWIM IN THE DEEP WATER: NEW WORK BY KENT WILLIAMS

Merry Karnowsky Gallery is proud to present a solo exhibition by Los Angeles-based artist Kent Williams. Applying his distinctive draftsmanship and painterly breadth, Williams continues to investigate the direct portrayal of human physiognomy and character. Presenting us with paintings that show both the figure in states of quiet observation, as well as full-blown struggle, Williams oscillates between how he portrays the contradictions posed by common existential realities. Like a vivisection of sorts, the figures in Williams’ canvases are often taken apart and physically fragmented by their surroundings. The intercut sections of the human body within Williams‘ turbid, abstracted backgrounds suggest an atmospheric mien - a proposal on how one’s own environment plays a role in the stability of one’s emotional life. This observance reveals life as a series of changes brought on by personal choices or external causes, but always compounded by the force these changes have on one’s daily life and perspective. This human condition creates unforeseeable turbulence in the lives of Williams’ beleaguered figures. Whether etched upon the faces of his subjects or shown through the shards of their fractured bodies, the inherent psychology of struggle is in the paint and portrayal of these figures and the spaces they occupy. This portrayal ultimately reveals the fragility of the human condition; deftly expressed in Williams’ sympathetic hands. In his newest work, Williams explores various materials, incorporating altered multiples, using a combination of silkscreen, oil and resin, both on canvas and paper. 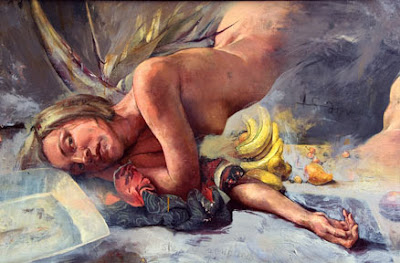