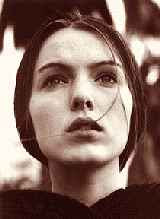 What album would you rescue first from a burning house? Jeff Buckley's Grace. I greatly admire his countertenor voice and rendition of three songs: "Lilac Wine," "Hallelujah" by Leonard Cohen, and my favorite carol, the "Corpus Christi Carol."
What song is better than coffee for helping you wake up? "Keep Young and Beautiful" by Annie Lennox. It's very cheery--a good sing-along song with lyrics such as "If you're wise / Exercise all the fat off!"
What song makes you swoon? Jeff Buckley's "Lilac Wine." His rendition of this song is one of the most moving.
What CD or song has taken you to the heights of ecstasy? Vier Letzte Lieder (Four Last Songs) by Richard Strauss, sung by Jessye Norman.
What song do you play when you're feeling sorry for yourself? Jacques Brel's "Ne Me Quitte Pas" or Marlene Dietrich's version in German, which is even sadder.
What CD would you play to get people to dance at your party? Anything by Fats Waller. I like to Charleston.
What's your favorite chill-out CD? The Lark Ascending by Vaughan Williams. A violin sounding like a bird soaring that reminds me of the English countryside. I like the word "lark."
What song would you play to attract butterflies? "Gymnopédie No. 1" by Erik Satie, a half-French, half-Scottish composer. Fellini-esque!
What song would you play to drive bugs away? Anything by the German contemporary composer Stockhausen. Electronic beeps and bleeps.
What book has most influenced your adult life? Antoine de Saint-Exupéry's The Little Prince and Chogyam Trungpa's The Myth of Freedom.
What's the most romantic book you've ever read? Letters to a Young Poet by Rainer Maria Rilke.
What's the best breakup song? "Nothing Compares 2 U" by Sinead O'Connor.
What's your favorite road-trip album? Ennio Morricone's soundtrack Once upon a Time in the West, though it changes according to the place.
What CD gives you the best out-of-body experience? Gustav Mahler's "Adagietto" from his Symphony No. 5, used for the Death in Venice soundtrack.
Publicado por Eduardo Alvarado en 13:14