In the fall of 1996, Jocelyn Montgomery and co-producer Heidrun Reshoeft took a trip along the Rhine river valley to explore the historical sites of Hildegard von Bingen's life: Disibodenberg, the convent Hildegard entered at the age of eight; Eibingen, the second convent she founded, where today nuns still live and work in the monastic daily routine of Hildegard's time; Rupertsberg in Bingen, where in her late 40's Hildegard founded her own convent, and lived and worked until her death in 1179. It is at the monastery after a performance of Hildegard's songs by Jocelyn that the idea of producing an album of Hildegard's music from a unique, modern perspective takes shape. 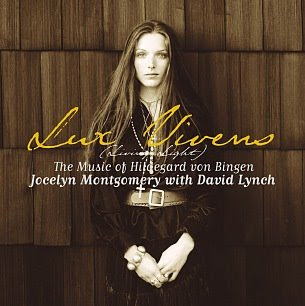 In 1998, David Lynch completed work on a new album by Jocelyn Montgomery. The album is based on 12th century verses by Hildegard von Bingen. The album was released in the US on August 25, 1998.
Publicado por Eduardo Alvarado en 17:45